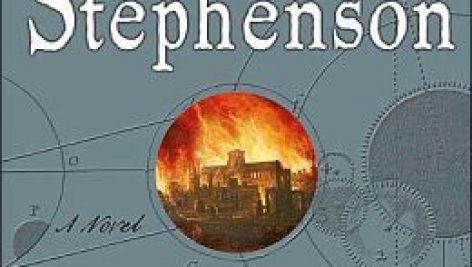 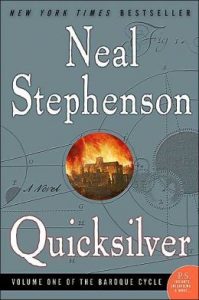 Quicksilver is the story of Daniel Waterhouse, fearless thinker and conflicted Puritan, pursuing knowledge in the company of the greatest minds of Baroque-era Europe, in a chaotic world where reason wars with the bloody ambitions of the mighty, and where catastrophe, natural or otherwise, can alter the political landscape overnight.

It is a chronicle of the breathtaking exploits of “Half-Cocked Jack” Shaftoe–London street urchin turned swashbuckling adventurer and legendary King of the Vagabonds–risking life and limb for fortune and love while slowly maddening from the pox.

And it is the tale of Eliza, rescued by Jack from a Turkish harem to become spy, confidante, and pawn of royals in order to reinvent Europe through the newborn power of finance.

A gloriously rich, entertaining, and endlessly inventive novel that brings a remarkable age and its momentous events to vivid life, Quicksilver is an extraordinary achievement from one of the most original and important literary talents of our time.

And it’s just the beginning…

“Whenever serious and competent people need to get things done in the real world, all considerations of tradition and protocol fly out the window.”

“Talent was not rare; the ability to survive having it was.”

“…But they had, perversely, been living among people who were peering into the wrong end of the telescope, or something, and who had convinced themselves that the opposite was true – that the world had once been a splendid, orderly place…and that everything had been slowly, relentlessly falling apart ever since.”

“This is one of the two great labyrinths into which human minds are drawn: the question of free will versus predestination.”

“Because, Jack, you volunteered to be taken down into eternal torment in place of her. This is the absolute minimum (unless I’m mistaken) that any female requires from her man.”

“And yet viewing several depictions of even an imaginary city, is enlightening in a way,” Leibniz said. “Each painter can view the city from only one standpoint at a time, so he will move about the place, and paint it from a hilltop on one side, then a tower on the other, then from a grand intersection in the middle–all in the same canvas. When we look at the canvas, then, we glimpse in a small way how God understands the universe–for he sees it from every point of view at once. By populating the world with so many different minds, each with its own point of view, God gives us a suggestion of what it means to be omniscient.”

“If money is a science, then it is a dark science…it has gone on developing…by its own rules”

“Leibniz is at the disadvantage of not having seen it. Or perhaps we should count this as an advantage, for anyone who sees it is dumbfounded by the brilliance of the geometry, and it is difficult to criticize a man’s work when you are down on your knees shielding your eyes.”

“In the wilderness, only the most terrible beasts of prey cavort and gambol. Deer and rabbits play no games.”

“You can say any sort of nonsense in Latin, and our feeble university men will be stunned, or at least profoundly confused. That’s how the popes have gotten away with peddling bad religion for so long, they simply say it in Latin.”

“You mentioned . . . one of the two great labyrinths into which the mind is drawn. What . . . is the other?”
“The other is the composition of the continuum, or: what is space?”
“The Bibliotheque du Roi then gives you the closest thing that currently exists to God’s understanding of the world.”
“And yet with a bigger library we could come ever so much closer.”

“. . . if money is a science, then it is a dark science, darker than alchemy. It split away from Natural Philosophy millennia ago, and has gone on developing ever since, by its own rules.”

“The cat, morbidly obese from eating virtually all of Isaac’s meals, fell off the table like a four-legged haggis, and trudged away.”

“No linear indexing system is adequate to express the multi-dimensionality of knowledge,” Dr. Waterhouse reminds him.”

“there was nothing you couldn’t accomplish if you crowded a few tens of millions of peasants together on the best land in the world and then never stopped raping their brains out for a thousand years.”

“But when you walk through yonder gate,” Churchill said, pointing toward the Middle Tower at the end of the causeway, which was visible only as a crenellated cutout in the orange sky, “you’ll find yourself in a London you no longer know. The changes wrought by the Fire were nothing. In that London, loyalty and allegiance are subtle and fluxional. ’Tis a chessboard with not only black and white pieces, but others as well, in diverse shades. You’re a Bishop, and I’m a Knight, I can tell that much by our shapes, and the changes we have wrought on the board; but by fire-light ’Tis difficult to make out your true shade.”

“I’ll buy it right now, Jack,” said an English voice, somehow familiar, “if you stop being such a fucking tosser, that is.”

“Magical?” “Non.” “Magnificent?” “Don’t be absurd.” “Less bleak than anything else we have seen?” “Now truly you are speaking French,” the ambassador said approvingly.”

“Like a couple of peasants huddled together in the Cathedral of Notre Dame, Jack and Eliza performed their role in the Mass and then departed, leaving no sign that they’d ever been there, save perhaps for an evanescent ripple in the coursing tide of quicksilver.”

“The sand was hard-packed and solid and wet, speckled all over with cockle shells in colors and patterns of such profusion and variety that they must have given the first Dutchmen the idea to go out into the sea and bring back precious things from afar.”

“No, rebellion is what the Duke of Monmouth did, it is a petty disturbance, an aberration, predestined to fail. Revolution is like the wheeling of stars round the pole. It is driven by unseen powers, it is inexorable, it moves all things at once, and men of discrimination may understand it, predict it, benefit from it.”

“Like a horseman who reins in a wild stallion that has borne him, will he, nill he, across several counties; or a ship’s captain who, after scudding before a gale through a bad night, hoists sail, and gets underway once more, navigating through unfamiliar seas- thus Dr. Daniel Waterhouse, anno domini 1685, watching King Charles II die at Whitehall Palace.”

“It is satisfying, and after a while he finds himself singing an old song: the same one he sang with Oldenburg in Broad Arrow Tower. He keeps time with his hammer, and draws out those notes that make the cargo-hold resonate. All round him, water seeps through the cracks between Minerva’s hull-planks (for he is well below the water-line) and trickles down merrily into the bilge, and the four-man pumps take it away with a steady suck-and-hiss that’s like the systole and diastole of a beating heart.”

“scratched out the first few terms of a series: “If you sum this series, it will slowly converge on pi. So we have a way to approach the value of pi—to reach toward it, but never to grasp it…much as the human mind can approach divine things, and gain an imperfect knowledge of them,”

“He closed his eyes and shook his head. “I am not one of those who believes that God made the world and walked away from it, that He has no further choices to make, no ongoing presence in the world. I believe that He is everywhere, making choices all the time.” “But only because there are certain things you have not explained yet with geometric proofs.”

“Most men would rather be shot through with a broad-headed arrow than be described by you.”

“[Enoch Root] hadn’t really known what to expect of America. But people here seem to do things—hangings included—with a blunt, blank efficiency that’s admirable and disappointing at the same time. Like jumping fish, they go about difficult matters with bloodless ease. As if they were all born knowing things that other people must absorb, along with faery-tales and superstitions, from their families and villages. Maybe it is because most of them came over on ships.
(Boston Common, October 12, 1713, 10:33:52 a.m.)”

“Each breaker, she supposed, was as unique as a human soul. Each made its own run up onto the shore, being the very embodiment of vigor and power at the start. But each slowed, spread thin, faltered, dissolved into a hissing ribbon of gray foam, and got buried under the next. The end result of all their noisy, pounding, repetitious efforts was the beach. Seen through a lens, the particular arrangement of sand-grains that made up the beach presumably was complicated, and reflected the individual contributions of every single wave that had ended its life here; but seen from the level of Eliza’s head it was unspeakably flat,” 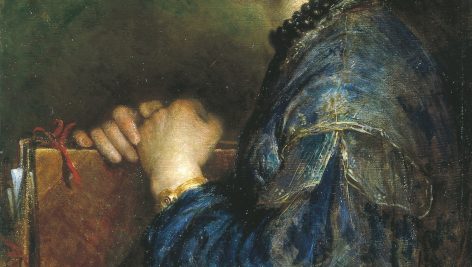 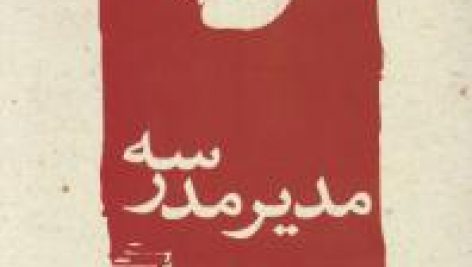 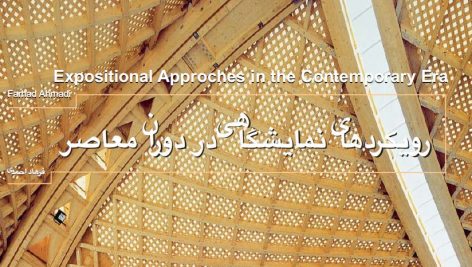 Download The Shadow Of The Wind by Carlos Ruiz Zafón
۲۰,۰۰۰ تومان
فروشنده 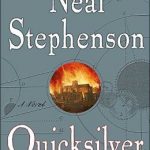